Association Between Cataract Surgery and Dementia 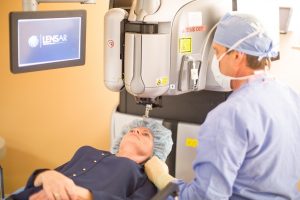 Dementia and the development of cataractous lens changes are both common diseases associated with aging. Dementia affects nearly 50 million people worldwide and no effective treatment exists. Visual impairment is an important dementia risk and cataracts are a leading cause of reversible blindness worldwide, affecting more than 35 million people globally. Over 4 million cataract surgeries are performed in the United States every year.

Twenty percent of adults older than 65 years in the United States experience significant sensory impairment, even with glasses. Addressing sensory loss that affects a substantial portion of older adults may be a potentially modifiable risk factor for dementia in later life.

A recent study of over 3000 people published in the Journal of the American Medical Association showed a protective effect of early cataract surgery to lower the risk of dementia development. This study is the first of its kind to show such a protective effect. It controlled for many confounding variables and still showed a significantly lower dementia rate in patients undergoing cataract surgery.

There may be several reasons for this finding. First, visual impairment may lead to psychosocial difficulties, withdrawal from social activities, and reduction of activity or exercise, all of which are associated with cognitive decline. Cataract-related visual impairment may decrease input to retinal or brain cells which may lead to nerve cell degeneration in the brain and dementia.

Also, the lower risk of dementia after cataract surgery could be associated with an increase in the quantity and quality of light in the eye’s retinal photoreceptors. Short wavelength (blue) light has been shown to be associated with cognitive function and circadian rhythm. As cataracts develop, they gain a yellow hue that absorbs blue light.  Therefore, removing the yellowed cataract may improve the transmission of blue wavelength light to the retina and thereby stimulate brain cortical activity.

Cataract surgery is a safe and common ophthalmic surgery. It can be life-changing in many ways- improved vision and less dependence on glasses. This study provides another important reason to consider cataract surgery if one’s vision is at all impaired. 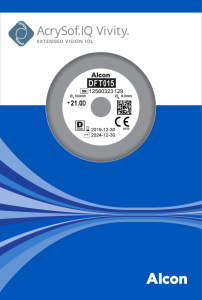 Cataract surgery is performed over 4 million times a year in the United States. Nearly everyone will need to consider cataract surgery at some point in their lives.

Modern advances in the visual treatment of cataracts through surgery have been remarkable. In the recent past, patients only had one intraocular lens option to correct vision after cataract surgery. There are many options today.

One of the most advanced and successful intraocular lens choices is the Alcon Acrysof® IQ Vivity IOL.

This intraocular lens is an extended depth of focus lens. That is, it gives more than just one single area of focus. It will extend one’s depth focus by providing excellent distance and intermediate (computer) vision and functional near vision. Most people achieve close to 20/20 vision at distance, 20/25 vision at intermediate, and 20/30 vision at near.

Alcon accomplishes this through proprietary lens optics known as X-wave technology. In addition to an extended depth of focus which limits the need for glasses use, the Acrysof® IQ Vivity lens is associated with fewer halos and night visual aberrations than other multifocal IOLs.

Over 90% of patients are very happy with the Acrysof® IQ Vivity lens. At Claris, it has quickly become the lens of choice to reduce the need for glasses after cataract surgery.